Our company was formed to find a better design that would provide E3 customers with performance advantages such as increased power, improved fuel efficiency, and a reduction in hazardous engine emissions that can contribute to global warming. With decades of experience in spark plug engineering and the automotive aftermarket, the principals of E3 Spark Plugs realized that the key to producing a better spark plug did not lie in the use of fancy metals, such as iridium or platinum. Instead, it would require an entirely new approach in the design of the plug's electrode to improve the ignition of raw fuel inside the engine's combustion area. The first step would be to get rid of the antiquated J-wire electrode. This would allow the flame kernel to move directly toward the unburned air/fuel mixture. E3's initial research started in its own laboratories and led to the testing of new designs at two leading engineering universities. After investing in years of research and assisted by top professors in the field of combustion and engine dynamics, the DiamondFire ground electrode was developed as a better way to ignite the fuel-air mixture inside the engine's cylinder. Since this advanced design increased the combustion pressure inside the engine before raw fuel was exhausted, they had discovered a better way to control the burn. A faster flame speed and improvements in directing the spark inside the combustion area resulted in a marked (and proven) increase in power output, fuel efficiency, and reduced emissions for gasoline-powered engines. These results were validated using the some of the most sophisticated testing equipment available. Over and over again, the new plug burned fuel more efficiently, improved power response, and cut toxic emissions. Today, E3 remains dedicated to reducing greenhouse gas emissions by limiting the amount of unburned fuel. 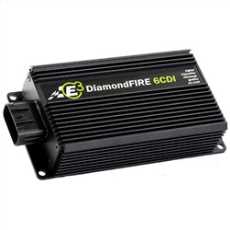